A Contract Lab’s Approach for Protein ID and Content Determination

It is estimated that 4 billion metric tons of food protein is produced globally. It is also estimated that $94M was lost by changing the nitrogen-to-protein factor for dairy products from 6.38 to 6.25 in Europe in 2006.  Proteins make up $4.7B dollars in the Sports Nutrition industry, which represents 70% of the total revenue in that category.

Non-selective protein methods have fueled the potential to adulterate samples with non-proteins and give inaccurate results. Melamine, urea, and free amino acids cannot be differentiated using Kjeldahl, Dumas methods and have been adulterants. Public health is still at risk; Economics still push adulteration.

Historically, there has been no direct analysis of proteins for identification. Instead, an indirect approach is taken. For example, the FCC monograph for whey protein identification requires: Ash, Fat, Lactose, Loss on drying, and Nitrogen (and apply conversion factor).

Let’s look more into the AOAC 2017.11 and 2017.12 method summary. Enzymatic digestion uses trypsin. There are separate peptides using Phenomenex Luna C18, 150×2 mm, 3 µm. Next, we use the Shimadzu Nexera method for 7.5 minute gradient with A: 0.1% formic acid in water and B) acetonitrile. Then we use Sciex API 5500 (triple quadrupole) to monitor three peptides from each protein source. Three peptide peak transitions each have peak area > ~2000 ppm = positive confirmation of protein.

Specific regions of the protein’s amino acid sequence were selected for analysis. The region is unique to the protein being identified. Then, tryptic peptides from the sequence are monitored. 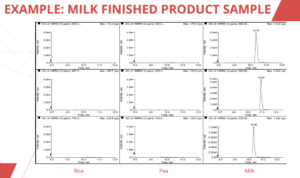 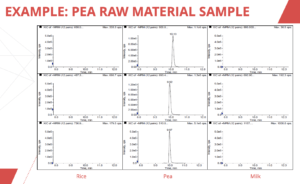 The Kjeldahl method is used most for contract lab testing in nutraceutical/food industry. However, the dumas method is being used more and more frequently. Other techniques used are: amino acids, dye-binding, etc.

Dumas determines total nitrogen including inorganic fractions like nitrite and nitrate. Kjeldahl determines only organic nitrogen and ammonia. Neither method is selective, since protein is not directly analyzed. Neither method can detect adulteration; separate analyses by other methods must be used to do so. Dumas typically provides slightly higher recovery than Kjeldahl. In a test, Dyad Labs analyzed 25 different samples; Mean recoveries: Kjeldahl reported 80.9%, and Dumas reported 81.3%. Lysine, nicotinic acid, and other compounds have difficulty digesting and are not fully recovered using Kjeldahl. AOAC 2001.11 reports recovery of lysine at only 87%. Kjeldahl and Dumas provide similar, tight precision.

For a batch of ~15 samples, average time for Dyad technician:

The gases used in Dumas are helium and oxygen.

The estimated cost per sample for a batch of about 15 samples is a difference of $3.50. For Kjeldahl, the cost is $7.50, and for Dumas the cost is $4.00. This estimated cost is based on typical batch size; includes direct costs only, such as labor, consumables, and instrument maintenance. Dyad charges same price for Kjeldahl or Dumas test.