For dietary proteins, our sample preparation is top of the line. We weigh the sample, then we add 5.0M urea in 50 mM Tris buffer. After that, we reduce the sample with 1 M dithiothreitol (DTT) for 30 minutes, and add Alkylate in 0.5 M iodoacetamide for 30 minutes. The sample is then digested with trypsin solution at 37°C overnight. The sample is then quenched with formic acid. We filter it with a disposable syringe and 0.22 μm nylon syringe filter. Finally, it is diluted (1:10) with 0.1% formic acid and 200 ng/mL internal standard, β-casomorphin 1-4 peptide. 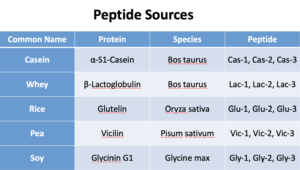 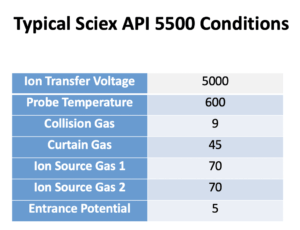 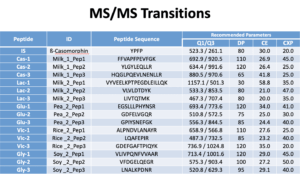 Raw materials identified using PCR are used to set the Method Reporting Limit (MRL). If all three peptides from same protein have larger peak area than the MRL (1000 ppm), a positive identification is made.

When it comes to precision, the Low and High concentrated sample was prepared six times. %RSDs for each peptide shown below:

Regarding reinjection reproducibility, samples were stored at 1-8C for 5 days and then reinjected.  The following are % peak areas compared to original.

LC/MS/MS is becoming a more common instrument in labs that test dietary supplements and foods. The estimated cost for analysis, including labor, instrumentation, reagents, consumables are: $197/first sample, $31/each additional sample.

Moving forward, our next steps will be to consider if the peaks in the fish gelatin samples peptides are from fish gelatin protein or something else? Does this matter? We will also consider different protein sources that can be added to the method as needed.